Lab diamond has been a hype these few years, taking over the limelight of the beauty of natural diamond. Is lab diamond worth the attention and the charm?

What are the Differences Between Lab Grown vs Natural Diamonds?

Lab grown and natural diamonds have the same chemical component, just the method and time involved differ. It can be produced in abundance in the shortest time whereas natural diamond would take billions of years to form and then mined.

Any lab grown diamonds assessed by GIA will have a certificate to certify that it is a lab grown/ man made diamond with type of processes. Lab grown diamonds will also have their own set of laser inscription on their girdle as shown on image below: 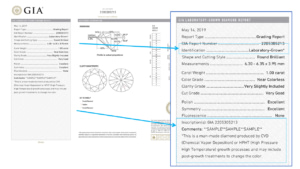 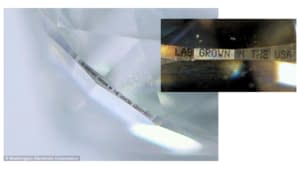 Lab grown diamond has been known to be a cheaper alternative. It may be lower in its price tag, but they have no resale value. In another words, you have a beautiful diamond but no jeweller would like to buy back since it has no rarity.

Producing lab grown diamonds do not support jobs for third world countries where economy is already in distressed as demands for natural diamond lessens. As natural diamonds go through the Kimberley Process* and Singapore has been a participant since 2004, the flow of conflict diamonds has been disrupted, protecting legitimate trade in rough diamonds.

The diamond industry has been overhauled in the last 20 years in response to many challenges that it has faced. It has evolved into a more transparent and ethical industry that has far more scrutiny applied to it than ever before. It is dominated at several levels by large corporations with strict requirements around employment and environmental standards.

The structure of synthetic diamonds and natural diamonds might be the same, but the remarkable beauty and character of a natural diamond are the fact that it was formed billions of years ago.

In the end, it is more than just a gemstone, it is the incredible journey a diamond had to go through before reaching your ring finger.

No other information about this author.